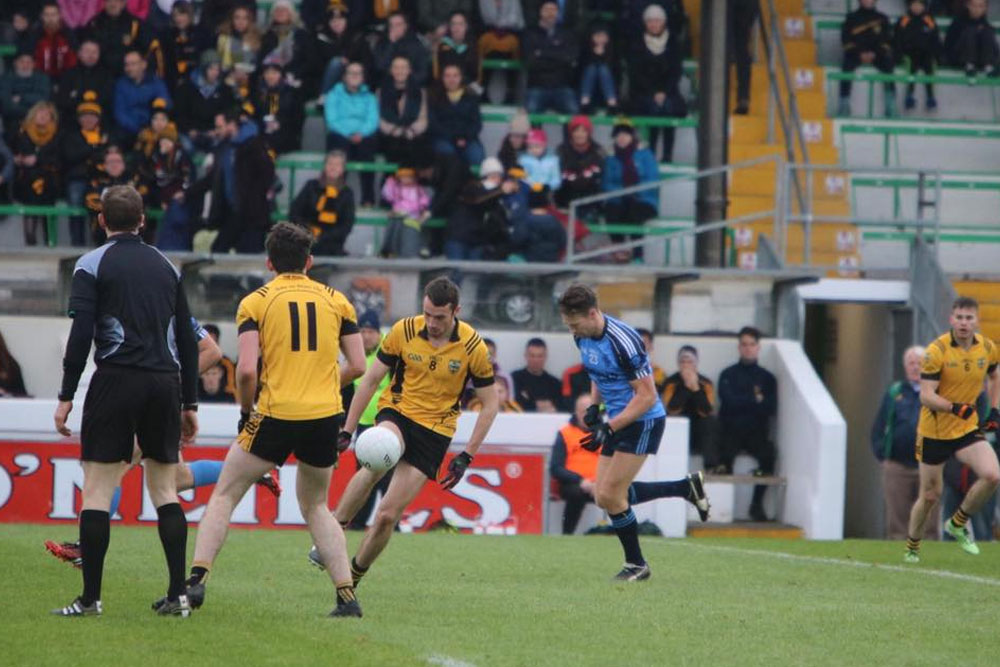 BIRTH OF ROSEMOUNT G.A.A. CLUB
In the aftermath of the 1914 – 1918 war, the G.A.A. started to gain strength in most parts of Ireland and in Westmeath it was no different. The people of Rosemount got together and discussed the formation of a GAA club. One major influence in the formation of the Rosemount club was the arrival to our National School in 1916 of a young Kerry teacher by the name of Ben Hickey who had played football with his native County. In early 1924, it was decided to affiliate a team to Westmeath County Board. At this time one of our founder members Johnny Smyth cycled to a meeting of Westmeath GAA in Mullingar and submitted our application for affiliation that was accepted – so Rosemount G.A.A. Club formally came into existence in 1924.

FR. O’GROWNEY PARK
In 1935, Rosemount G.A.A. availed of the opportunity to acquire land. They applied to the Irish Land Commission and were given a site of approximately six acres. Long hours of hard work by many willing volunteers led to its eventual development. The park was officially opened in 1943. It was named after a noted Irish Scholar Fr. O’Growney. Over the years with the aid of loans and grants the pitch was greatly improved by drainage and leveling. In 1979, a new community centre was built in the parish on the grounds of the football pitch and for the first time the footballers had their own dressing rooms. At that time, it could compete with any club grounds in the county – but with the growing number of young people in the parish there is more demands on the present playing pitch and this further development is necessary.
In 2004 the club embarked on a very ambitious 5 year plan. In phase 1, a 3 Acre site was purchased where we now have a second playing pitch where floodlighting was also installed which has enabled training under lights. 2 additional dressing rooms were also provided in 2005.In 2007 work commenced which will have all weather “Astro Turf” playing pith available by end of November

CLUB PARTCIPATION At COUNTY LEVEL
Over the years the club has always contributed handsomely to the County Team and always wore the county jersey with pride. As far back as 1929 when the county junior team blazed a trail throughout Leinster and carrying the scalps of teams like Meath, Longford and Laois they captured the provincial title and went on to beat Limerick in the All Ireland Final. Anthony Mullen and Johnny Smyth represented Rosemount that day. From 1929 to the present day Rosemount were always to the forefront in augmenting the County teams. In 1963, they were represented by Tom King and Kevin Kelly when Westmeath were beaten in the All Ireland Minor Final.
In 1995, Cathal Keane and Tommy Maleady represented Rosemount on the Westmeath Minor Team that won the All Ireland Final . In 2004 when Westmeath made history by winning the Lenister final for the first time the “Man of the Match” for this game was John Keane who represented our club
It is with great pride that when you look back over the past 70 years you will see many family names from Rosemount which represented their County and province which include names like Boland. Maleady, Lynam, Carberry, Ward, Healy, Kelly, Darcy, Fox and Keane.

ROSEMOUNT’S PARTICIPATION AT COLLEGE, PROVINCIAL & NATIONAL LEVEL
During the years many of our players were domiciled in Dublin. One of these was Colm Boland who played football with Rosemount and Westmeath and also Minor Hurling with Westmeath. He helped Westmeath to win the 1936 All Ireland Junior Hurling Championship. He was selected to play for the Leinster Railway Cup Hurling Team in 1938.
George Keane was on the Westmeath Minor Team in 1957/58 and progressed to the Senior Team in 1959. He was honored by the selectors of the Combined Universities Team on four occasions – one of them being 1962 when they beat the rest of Ireland selection. With U.C.D., he won two Sigerson Cup medals. In 1964, he was chosen on the Leinster team.
Down through the years Rosemount Club have been very well represented on a number of second and third level College teams and it was with great pride we had a number of Rosemount players on the Carmelite College team that brought great honor to Moate on a number of occasions.
A number of local second and third level colleges continue to have representation from our club on their team. In fact one of the present Rosemount players captained the Maynooth Sigerson Team in 2003.

CLUB & SCHOOL PARTICIPATION
Rosemount Club have participation in 9 different age/group competitions in Westmeath which are mainly boy’s aged 8 – 40. We also have ladies competitions in various categories and indeed a number of Rosemount ladies were represented on the Westmeath Camogie team as far back as the sixties and this tradition continues today. Rosemount are the present under 16 County Champions. Rosemount National School participation and achievements in Comortas Na mBun Scoil is worthy of note having won the competition numerous times over the past number of years including 1999 and 2000 when they were County Champions.

CELEBRATIONS
During 1999, Rosemount celebrated its 75th Anniversary; the highlight of the year was the Dinner Dance on the 13th November. The evening started with a candle lit procession from the pitch to the church where Mass was concelebrated by Fr. Jimmy Murray, O’Carm, former player and very loyal servant to Rosemount and Fr. Padraig McMahon, C.C. Many former players returned for the night with much discussion took place of great matches around the county over the years. The guest speaker on the night was Sean McCague – then President – elect of the G.A.A. The club was honored to have in attendance George Smyth (94yrs of age) who was one of the founding members of the club and its first secretary.

SCÓR
On the cultural side, Rosemount has for the past twenty-five years been to the forefront in Scór Na nÓg and Scór Sinseár. In 1978, a committee was formed and Rosemount entered teams for the Scór Na nÓg competitions that year and they certainly got off to a marvelous start when David Sheridan and Tommy Murphy went all the way and won the All Ireland Final in the instrumental music section. In the same year we took part in Senior Scór, and from that good day to this our club has been represented in Scór competitions Junior and Senior every year. We had many notable successes and won many County Finals but our next finest achievement came in 1995 when our Junior Ballad Group won the All Ireland Final. The exhilaration of winning Leinster and All Ireland Finals will never be forgotten and above all we value the firm friendships made with Scór competitors and supporters over the years.

RECENT TIMES
2007 brought great joy for our club which played Senior football 1934 -2000 when they were relegated to Intermediate won the Junior Championship getting to a Lenister final also winning Minor, Junior B and the Junior Cup in 2007.
We are very hopeful that with our underage structure working very well that we will continue to build on the progress made during 2007. 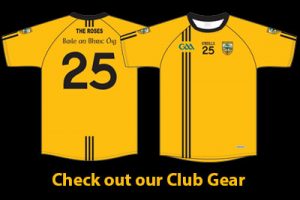